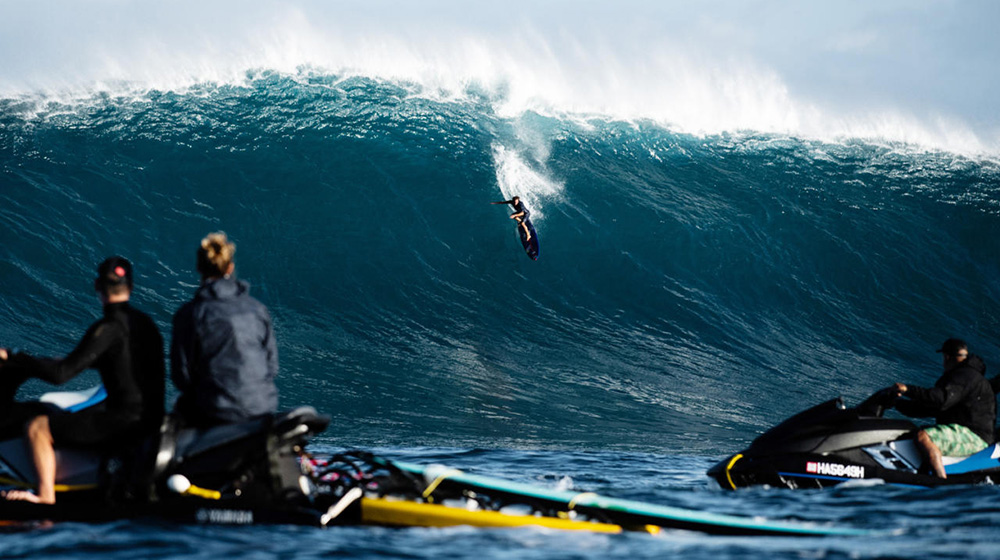 Jaws and Nazaré are two of the most select world-class venues that hold the monster swells needed for these events to go forward. The last time we saw these events in Jaws and Nazaré, Kai Lenny redefined their tow-in performance: instead of making giant waves, Lenny and his team used the entire wave face (size of a city building) to complete maneuvers.

Also other athletes like Justine Dupont have pushed limits of performance trying to ride the best and biggest waves in the world. The riders of the biggest waves became winners in the 2021 Red Bull Big Wave Awards.

Paddling their way to Jaws

Until not long ago, Jaws was considered a tow-only venue.

However, now we see athletes as the “King of Jaws” Billy Kemper, Nathan Florence, Paige Alms or Ian Walsh paddling in the water and then turning and getting barreled on waves that before were impossible to ride without a jetski. This new generation of surfers come after Maui’s “strapped” crew - Laird Hamilton, Dave Kalama, Brett Lickle, Pete Cabrinha and Rush Randle.

These were some of the first surfers in Jaws in the early 90s, an exclusively tow wave until 2011 when other surfers such as Greg Long, Mark Healey, Nathan Fletcher and especially Shane Dorian chased these monster waves under their own stream.

You might like: Watch on Nautical Channel Maya Gabeira - Return to Nazaré after her horrible crash that almost took her life.

Why are Jaws and Nazaré so special?

Nazaré is one of the best tow-surfing big wave locations in the world due to an 130-mile-long underwater canyon that funnels swell into a headboard that is half a mile off the shore. This way, the energy of the swells is concentrated, producing some of the largest and most intense waves on the planet.

At its deepest point, the canyon reaches 5 kilometers deep. Hawaiian Garrett McNamara began towing in Nazare when this was just a fishing village off the radar of most surfers. He first surfed Praia do Norte or North Beach in 2010, and the next year he rode a 78ft wave that entered him in the Guinness World Records. To put into perspective, a 70ft wave weighs an estimate of 1,000 tons.

You will like: Watch Garrett McNamara & The Essence of Big Wave to dive deeper into his world and drive.

Regarding Jaws, it is one of the best spots when it comes to paddle-in big wave surfing. This is mostly due to its big change in water depth, there is a sudden change in the seabed from very deep to relatively shallow. Also, there is an extremely deep trench close to the shore that comes up from 100ft to 20ft.

The issue with Jaws is the strong winds, making Maui a windsurfers’ paradise. The reef handles giant swells, but often the wind is too strong to paddle. On these occasions, surfers compete in a tow session.

The Quicksilver Jaws Big Wave Challenge will feature paddle-in surfing in an individual competition format. 24 competitors will compete in the men’s division, divided into four heats of six surfers for the first round. These are generally 45 minutes and they may catch as many waves as they want with a  panel of five judges. The two best waves are counted.

In the women’s division, a similar format will take place with 12 competitors participating in two six-surfer Semifinals with the top three surfers advancing to the Final.