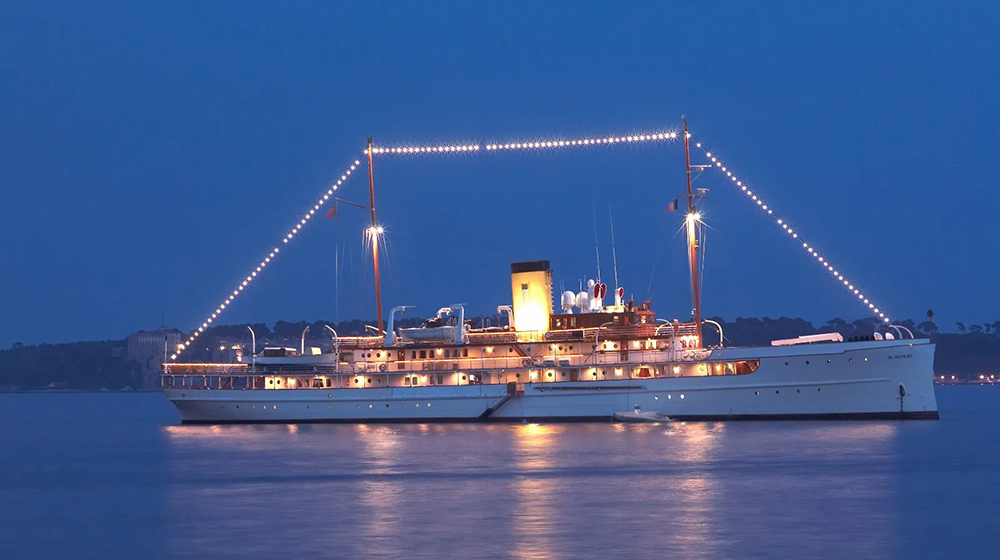 The 101-year-old classic yacht that runs on steam

The SS Delphine is an iconic yacht that reached a major milestone in April 2021: celebrate its 100th birthday. Now, a year older, the yacht has been renovated on the inside but still uses steam to move around.

“She is the only superyacht in the world still operating today with her quadruple expansion steam engines,” -Emmanuel R Buetss, SS Delphine’s Manager.

Although it was built for Horace Dodge, American automobile manufacturer pioneer, the 78-metre yacht has hosted heads of states while they planned peace treaties. SS Delphine was launched in 1921 at Great Lakes Engineering Works. At that time, she had the largest gross tonnage of any yacht in America.

Originally it was equipped with Babcock & Wilcoz boilers. These supplied power for her two 1,500-horsepower steam engines. However, the engine room was updated in 2003 during a refit. Now, two modern water-tube boilers that power the original engines.

In 1926 the SS Delphine was almost destroyed after catching fire and sinking in New York. However, she was miraculously salvaged and restored.

Christened as the USS Dauntless

In 1942 SS Delphine was requisitioned by the US Navy and christened the USS Dauntless. During this time, she served as the flagship for naval commander Admiral Ernest King during WWII.

Once the war was over, she hosted US president Franklin D Roosevelt, vice president Harry S Truman, UK prime minister Winston Churchill and Russian diplomat Vyacheslav Molotov. This was when they prepared for the Yalta Conference, the event that determined how Europe would be reorganised after the war.

“The privileged status of having been Admiral Ernest King’s ship certainly helped her avoid the unfortunate fate of other steamships that did not survive the war, allowing her to delight us today with her original splendor.” -Buetss

Once WWII was over, she returned to the Dodge family. However, over the next 50 years she changed of owners on several occasions. As a result, by 1997 her condition had worsened, so although the owner paid a low price for the vessel he had to pay €45 million to restore the iconic yacht to its former glory.

During the five-year restoration, her original Tiffany décor layout and design was kept as possible.

“That is indeed why sailing on board the SS Delphine is not only a maritime journey, but above all a journey through time that takes us back to the Belle Époque of the 1920s in the decorations, carvings, wall patterns and carpets that are exact replicas of the 1921 plans,” -Buetss

In 2003 the yacht changed names once again, this time by HSH Princess Stephanie de Monaco. Now, the current owners offer exclusive events aboard the yacht and charters in the Mediterranean.

You might find interesting: How expensive is it to charter a luxury yacht?

“Sailing on SS Delphine is not only a visual pleasure but also the opportunity to enjoy a steam engine which, beyond its timeless aesthetics, also offers a unique noiseless and vibration-free comfort forgotten by the hectic modern machines,” -Buetss