To date, the VENDÉE GLOBE is the only solo sailing race around the world that is non-stop and without assistance. The event followed in the wake of the Golden Globe that initiated the first circumnavigation of this type via the three capes (Good Hope, Leeuwin and Horn) in 1968.

44,996 kilometres, or 24,296 miles. That is the circumference of the Earth. The Vendée Globe accomplishes in 74 days this planetary voyage as participants sail down the Atlantic, across the Indian and face the challenges of the Pacific Ocean. The public refer to this arduous competition as the Everest of the seas, and this 9th edition will see 33 contenders depart from Les Sables-d’ Olonne to take part in a life changing competition.

In this year's edition, sailors had to overcome storms, take advantage of high winds and competition has never been this close at the end as three skippers that are just 60 miles apart rush to cross the finish line first.

Who ended up getting proclaimed the champion of one of the hardest sailing races in the world? Find it out on Nautical Channel. 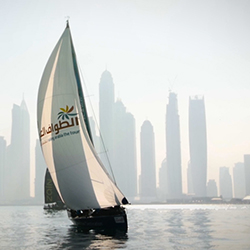