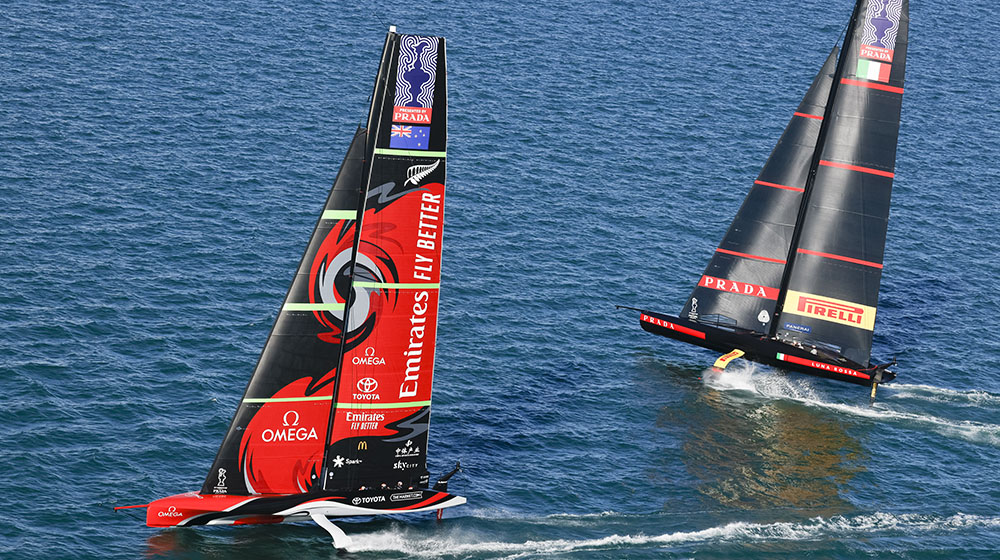 The second day of racing at the America’s Cup Match has come to an end with a surprising outcome: teams have tied once again in this competition that has never been so hard-fought. Now both teams have a deadlock 2-2 and we will be expectant during the weekend to see if any team will be able to surpass their competitors.

Recommendation: If you haven’t yet, read how Day 1 of the America’s Cup Match went HERE.

As both boats headed out to the left-hand boundary, Emirates Team New Zealand was first to tack, and the Italian team took advantage of the situation by pausing just at the perfect moment that allowed them to tack underneath them and force the kiwi team to tack away. From then on, we can say it was smooth sailing for Luna Rossa Prada Pirelli.

The second race went differently. With a wind of 8-9 knots, it was Emirates Team New Zealand’s time to enter on port. Team Luna Rossa Prada Pirelli gybed to get onto the tail of their contenders, but they decided to back down from going for the hook. As Luna Rossa Prada Pirelli headed to the right-hand side of the course, Emirates Team New Zealand tacked underneath them, forcing them to back to the right.

Auckland is now in COVID-19 Level 1, so besides a most exciting America’s Cup Match the America’s Cup Race Village is now open for spectators to enter and engage in exciting village activities.

The 36th America’s Cup Match is proving to be an incredible competition between the defender Emirates Team New Zealand and the challenger Luna Rossa Prada Pirelli Team. If you want to receive updates on the race, follow us on Facebook, Instagram or Twitter.