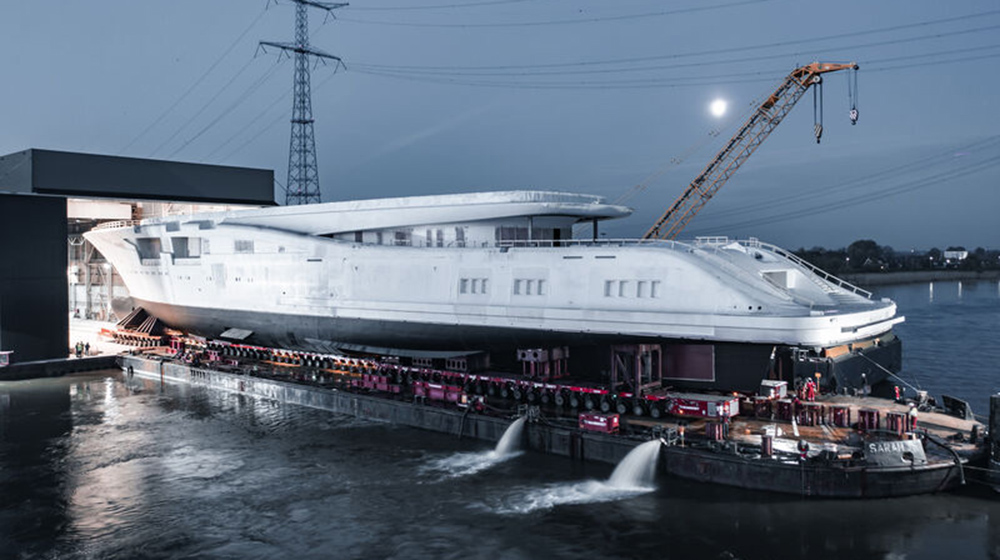 Images of the largest Feadship yacht under construction

Images of the secretive project have revealed the work of the Dutch shipyard.

The 118.8-metre Feadship superyacht Project 821 launched its hull from its shed at the NMC shipyard in the Netherlands this morning. Once the yacht is launched, this will be the largest yacht built by the Dutch shipyard.

It is estimated that the volume of Project 821 surpasses more than 7,000 GT, and it will be slightly larger than the 118-metre Project 1010 that will be launched later on this year. The yacht will be delivered in 2024 if everything goes as expected, and will be the flagship of Feadship.

The ship is being built in parts and is one of the largest superyachts under construction in the Netherlands. The upper aluminium decks still need to be joined together, and a large beach club can be seen to the aft of the yacht.

Feadship is a known world leader in custom superyachts and is the association between De Vries Shipyards and Royal Van Lent Shipyard. Many of the world’s most impressive yachts have been built by Feadship: Venus, Steve Jobs’ superyacht for instance.

The company has three yacht-building facilities in the Dutch country. One is located in Makkum, another in Kaag and the third in Aalsmeer. Meanwhile, the yacht design and engineering centre is in Haarlem, named De Voogt Naval Architects.

You will find interesting: 10 ridiculously expensive superyachts sold in 2021

Formed in 1949, the group can be traced back to a further century. The De Vries and Van Lent families launched iconic boats in the 1800s and first half of the 1900s. Later on they decided to join efforts to deliver outstanding creations.

So far, the shipyard has built a fleet of over 250 vessels, most of which are motor yachts. Amongst their most notorious custom yachts, we find the following: